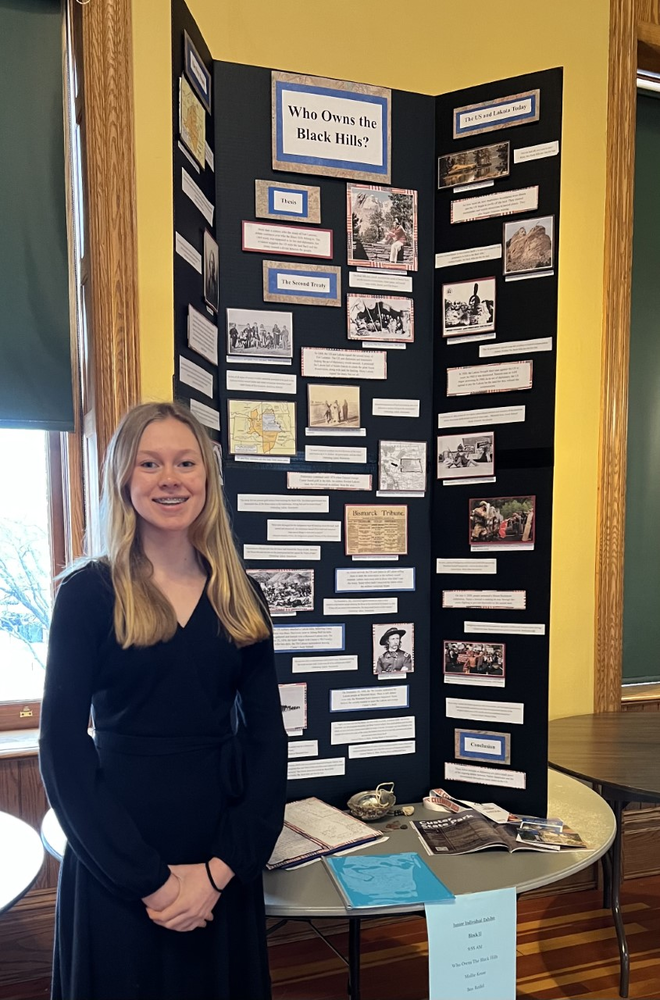 History... In the Making!

Two Sioux Falls School District students will have their work featured in virtual showcases at cultural institutions in Washington, D.C this summer.  The local projects made it through a competitive selection process as part of National History Day, a year-long academic program for 6th-12th grade students focusing on historical research, interpretation, and creative expression.

The competition encourages students to immerse themselves into a historical time period and become writers, filmmakers, web designers, and artists to showcase the event.

Mollie Kruse, an 8th grade student in Accelerated Social Studies at Ben Reifel Middle School and pictured above, prepared an exhibit titled "Who Owns The Black Hills?"  Mollie was one of four Ben Reifel students who qualified for the state competition.  She will compete in the NHD national contest to be held virtually this summer.  Her work was supported by teacher Danyelle Cleveland.  Kruse's exhibit will be on display at the Smithsonian's National Museum of American History.

Roosevelt High School student Nathan Arens' documentary titled "John Brown's Death and How It Caused the End of Slavery" will be featured at the Smithsonian's National Museum of African American History and Culture.  Arens' work was supported by RHS teacher Marta Benson.

Congratulations to Mollie and Nathan!  Your hard work is noticed!